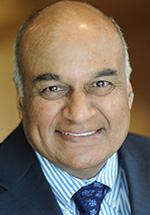 Raju Kucherlapati received his Ph.D. from the University of Illinois at Urbana and did his post-doctoral work in the lab of Frank Ruddle at Yale University.  He was assistant professor in the Department of Biochemical Sciences at Princeton University, and then became professor in the Department of Genetics at the University of Illinois College of Medicine. In 1989 Dr. Kucherlapati went to the Albert Einstein College of Medicine where he was the Lola and Saul Kramer Professor of Molecular Genetics and University Chairman of the Department of Molecular Genetics, a position he held for eleven years.  In 2001 Dr. Kucherlapati became the Paul C. Cabot Professor of Genetics and Professor of Medicine at Harvard Medical School and was the first Scientific Director of the Harvard Medical School-Partners HealthCare Center for Genetics and Genomics (HPCGG).

Dr. Kucherlapati contributed to several different areas of research.  These include gene targeting and homologous recombination, human gene mapping, and generation of physical maps of the human genome with special emphasis on human chromosome 12, development of techniques to modify genes in mammalian cells and in cloning many human disease genes He was a member and Chair of several review committees at the NIH, was a member of the National Advisory Council for Human Genome Research at the National Human Genomics Research Institute, and was a co-chair of the steering committee for the National Cancer Institute’s Mouse Models for Human Cancer Consortium. He served on the editorial board of the New England Journal of Medicine and was editor in chief of the journal Genomics.  He is a fellow of the American Association for the Advancement of Science and a member of the National Academy of Medicine.

Since 2010, Dr. Kucherlapati has been a member of Presidential Commission for the Study of Bioethical Issues.