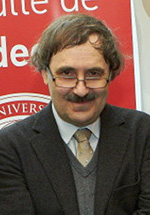 After obtaining his PhD, he moved to France where he was one of the founding members of the CEPH, which pioneered the international collaboration on the human genome in the 1980s and 1990s. In 1993, he moved to the University of Oxford, where he was a Wellcome Trust Principal Fellow and Professor of Human Genetics. At the University of Oxford he was the co-founder and first scientific director of the Wellcome Trust Centre for Human Genetics, an institute created to apply genomic approaches to understanding the molecular basis of human disease. Starting from a core of 30 staff, under his direction the Centre expanded to over 150 members. At the request of the French government he returned to France in 1998 to found the CNG as the principal national infrastructure for human genetic studies in France. Starting from an initial core of approximately 10 people, the CNG now has approximately 100 staff with a budget of 25‐30 M Euros from national and international sources, and has established itself as the leading centre for large‐scale genetic studies in Europe.

In 2005, the French government asked Prof. Lathrop to serve as the scientific director of the Foundation Jean Dausset – Centre d’Etude du Polymorphism. In addition to his role at the CNG and CEPH, Dr. Lathrop was visiting Professor of Human Genetics at the Institute of Medical Sciences, University of Tokyo from 2006‐2011. He joined McGill University in April 2011 he is Scientific Director of the of McGill University and Génome Québec Innovation Centre.

Prof. Lathrop is co-lead of Canada’s Genomics Enterprise, a National Consortium of Canada’s leading centers funded by the Canadian Foundation for Innovation including McGill University, SickKids Hospital in Toronto and the University of British Columbia.