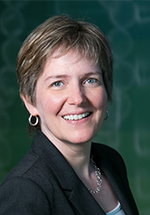 With more than 20 years of international experience in both the academic and private sectors, Dr. Catalina Lopez-Correa’s deep understanding of genomics has inspired leaders in science and industry to collaborate toward solving some of the world’s greatest challenges.

Prior to joining Genome BC, Dr. Lopez-Correa was the Vice-President and CSO, Scientific Affairs at Genome Quebec, where she was instrumental in developing competitive teams for national and provincial research projects raising the profile of Canadian genomics on the global stage.

Dr. Lopez-Correa has been equally effective in the discovery pipeline where, as a Principal Research Scientist with Eli Lilly, she was part of the Pharmacogenomics and Translational Medicine Group in charge of discovering and validating genetic/genomic biomarkers in therapeutic areas of oncology, cardio-metabolic and neurosciences. She also helped develop the company’s tailored therapeutics and personalized medicine strategy.

As Head of the Cytogenomics laboratory at the renowned deCODE genetics lab in Iceland, Dr. Lopez-Correa developed screening strategies to detect genomic rearrangements and their association with common diseases.  She has also worked for two different American biotech companies in the UK (Genomica and Informax).

As part of her commitment to international development, Dr. Lopez-Correa founded the not-for-profit organization ODNS (Organisation pour le Développement avec des Nouvelles Solidarités) in 2012 and has been involved in several initiatives aimed at demonstrating the impact of genomics in developing countries.

She is a member of several associations in the field of genomics and science innovation. Since 2002 she has served as evaluator for large multinational projects funded by the European Commission and has been recognized by several awards nationally and internationally.

Dr. Lopez-Correa holds a Medical degree (MD) from the Universidad Pontificia Bolivariana in Colombia, a Master degree in Human Genetics from Paris V University in France, a PhD in Medical Sciences from the KULeuven in Belgium, and a mini MBA from McGill University in Canada.

2013: National order of Merit Award in the Rank of Officer. Appointed by the Honorable President of the Republic of Colombia, Juan Manuel Santos Calderon. This honorable distinction is conferred to Dr. Lopez-Correa for her outstanding professional and academic career and the scientific contributions in the field of Genomics in Canada