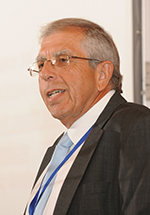 Bernard Lerer graduated from the University of Cape Town Medical in 1971. He was trained in psychiatry at Hadassah – Hebrew University Medical Center and Herzog Hospital in Jerusalem. From 1982-84 he was a post-doctoral research fellow at Lafaytte Clinic, Wayne State University, Detroit with Prof. Samuel Gershon. Prof. Lerer’s main research interests are the molecular genetic basis of major psychiatric disorders, pharmacogenetics of psychotropic drugs and the neurochemical mechanisms of antidepressants, mood stabilizers and brain stimulation as a basis for novel drug development.

He has been a Fellow of the American College of Neuropsychopharmacology since 1996. Prof. Lerer has extensive international research collaborations and has been Visiting Professor at the Universities of Cape Town, Copenhagen, Hiroshima and Miami. He has received research support from the National Institutes of Health, the European Union, the Israel Science Foundation and the Israel Ministries of Health, Science and Economics. He has published over 360 papers in peer reviewed journals as well as book chapters and four books and holds patents in the fields of pharmacogenetics and psychopharmacology. In a teaching career spanning three decades, Prof. Lerer has mentored more than 120 PhD and MSc students and psychiatrist research trainees.